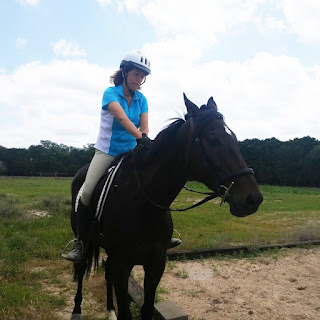 Silk is ready to be ridden.  He has responded beautifully to all the ground work and seems relaxed and happy.  He gives his head properly to both the rope halter and the bridle.  It's time to get on and ride.

I am never sure how this step may turn out, so I am always a little worried about it.  Yes, I rode Silk when I picked him up from my friend Jerry's place.  But there, I had the security of a round pen.  At my place, I am in the middle of five acres.  Jerry had suggested to me that I might want to consider giving Silk some oral acepromazine to keep him calm on the first four or five rides.  I decided before trying something like that, I wanted to see what his barometer might be about riding out in the open.

I arranged for a friend to come over to baby sit me.  My husband was out of town and getting on an ex-racehorse for the first time is not something you want to undertake without someone around to pick up the pieces.

I explained to my friend that I might only be on him for a minute or two.  My goal is to get on, walk around a bit then get off before the horse can become upset, anticipating but not being allowed to run.  I have worked with retired racehorses this way in the past and after about two weeks of these very short rides, preceded with ground work, the horse starts to get the idea that the work out does not include galloping.

Saturday morning arrived and my friend Beth showed up and I got started with Silk.  He was his usual good citizen in the barn, standing quietly while I groomed him and tacked him up.  I led him down to the arena wishing it wasn't such a windy day.  The wind was gusting heavily and that is not ideal for any first time experience for a horse.

Silk did his ground work beautifully.  I then led Silk over to my mounting block and asked him to give his head to pressure on the bit while I stood on the mounting block as I had done in several of our past workouts.  Silk stood quietly while we did this.  There was nothing left to do but get on. 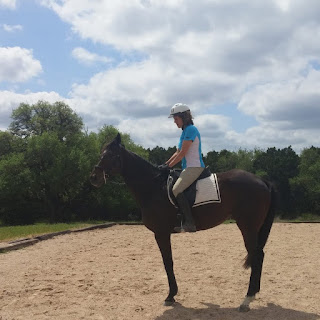 I asked Beth to stand about a yard in front of his nose to provide a bit of a visual barrier to him moving off.  I then put my foot in the stirrup and swung aboard.  He stood absolutely still for me to get on and did not move as I settled into the saddle.  At this point I silently blessed whoever it was in his past who had taught him properly about mounting.

I just sat on him, not asking him to move stroking his neck.  I was very happy with how this first step had gone.  We stood quietly for almost five minutes.  Then I asked him to move off.

Tension immediately rippled through his body.  We stepped into the arena, his head was high and he seemed ready to take off for a galloping work out.  I asked him to stop after a few steps.  He did but his concern was evident.  I stroked his neck and asked him to walk again.  He stayed tense, confused and worried.  I was not letting him do the work he was sure he was supposed to do.  I rode him in a small circle with starts and stops as smooth as I could make them.  After about a minute, I got off.

I was glad he was quiet for the dismount.  I had a lot of thinking to do.  He had been so quiet for the ground work that his level of tension when I rode really had surprised me.  It was going to take a lot of thought to decide how best to move forward with Silk and transition what he expects out of being ridden.
at May 01, 2017