Of Carrots and Racehorses 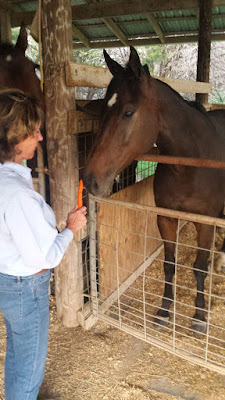 One constant theme that runs through thoroughbreds off the track is that they don't know what a carrot is or that they can eat it and like it.  I like my horses to respond to treats.  You can get them to do really cool things for treats.  And besides it makes me happy to see them happily crunching on a carrot.

My long time partner, Eliot, is a true carrot hound.  He will do anything for a carrot.  This fact was brought home to me after watching an episode of the the Mustang Millionaire Makeover on TV.  I watched these fantastic trainers doing amazing things with mustangs in only a few months.  At that point I had been riding Eliot for two years and we still couldn't win a training level test at a schooling show.  I felt stalled out.

I decided I would teach Eliot something cool.  “I am going to teach Eliot how to bow.”  I announced to my husband.  My husband looked at me and said “Yeah, you go ahead and do that”.  He is pretty used to crazy talk from me.

I went to the computer and watched two Youtube videos on teaching your horse to bow.  I then grabbed an handful of carrots and went to the barn.  I put a rope halter on Eliot and took him to the arena and started following the directions from the videos.

And by golly, it worked.  Eliot had absolutely no resistance to the idea of bowing as long as there was a carrot in it for him.  By the third lesson he was a pro.  From this I learned a carrot hound horse will do anything for a carrot.

So, how to get Silk to eat a carrot?  He would sniff it with disinterest and then turn his head away.  I tried feeding carrots to Eliot right next to him.  Eliot thought this was great!  Silk found it pointless.  No interest in carrots at all. 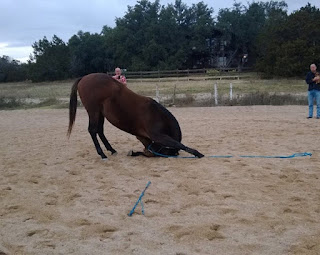 I was peeling carrots for dinner one night and I got an idea.  I saved the peelings and put them on top of Silk's feed that night.  When I checked his food dish later, most of the peelings were gone, so he had at least eaten a few.  A few days later I put more carrot peelings on his food.  This time he ate them all.

I then tried offering him a carrot.  He put the tip of it in his mouth and scraped his teeth along it.  Finally, he took a micro bite.  He didn't take another.  The next time I offered him a carrot, he did the teeth scraping thing again and took another bite.

We are on a carrot roll now.  He looks forward to his carrots.  He is still not very good at biting off pieces but that should come with practice.  If he develops a carrot addiction, I will see if I can teach him to bow as well.
at May 16, 2017