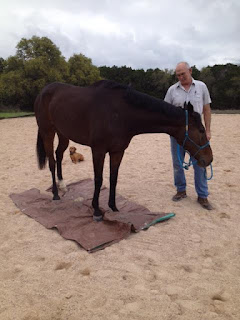 Silk and I have learned a lot about each other this week.  It is really rather strange to have a horse in the barn about which I know practically nothing.  Time is starting to take care of this.

The week has been to daily sessions in the arena doing rope halter work.  The first day was tough.  Silk had no idea what he was supposed to do and it was my job to explain it clearly to him.  The point of the exercise if for the horse to give his head to pressure.  For several repetitions Silk thought the answer was to go backwards instead of giving his head.  The problem was more pronounced on the right side than on the left.

He finally stopped trying to go backwards and started to give his head a little.  I figured that was a good place to stop for the first day.  Silk seemed to think about things overnight and the next day he answered correctly to the pressure by giving his head.  I was really pleased with how quickly he had learned.  Silk seemed pleased too.

Over the course of the week we added additional exercises including moving the hindquarters in response to pressure and backing up when asked.  We also started some lunge line work.  This proved to be difficult as I do not have a round pen and Silk didn't seem to understand longing out in the open.  Over the course of the week we went from not really longing at all to being able to get three nice laps at the trot each way.

Then we added a tarp to the lessons.  It really got Silk's attention when he saw my husband walking towards the arena with a tarp under his arm.  I wasn't sure how this might go. 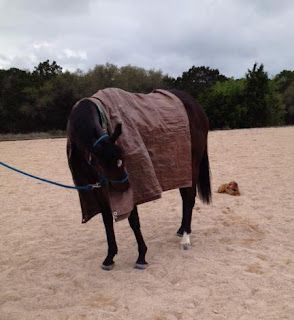 We allowed Silk to sniff the tarp and nibble on it.  Then we rubbed it all over him and then threw it on the ground in front of him.  Silk lowered his nose to sniff it.  He didn't seem at all bothered.  We then spread the tarp out and asked Silk to walk on it.  With the barest hesitation, Silk stepped on the tarp.  Then he relaxed and we were able to lead him on and off the tarp without any trouble.  We could pick the tarp up and put it on his back and drag it all over his body and he didn't mind this at all.  He was quiet throughout.

Sunday I had a horse show with Eliot.  After careful consideration, I decided to put Silk in the trailer as well and take him.  He might as well start learning that just because he takes a trailer ride and goes to a place with other horses and trailers and atmosphere it doesn't mean he is going to race.

We arrived at the show, set up our area (I like to show in comfort, the shade tent goes up, the camp chairs come out and the ice chest is located for convenience) and then unloaded the horses.  We decided to take advantage of the empty round pen and lunge Silk and let him buzz off some energy before seeing what he thought of being tied to the horse trailer.  My husband, Mike, lunged Silk while I brushed and combed Eliot.  After lunging, we hosed Silk off and brought him to the trailer. 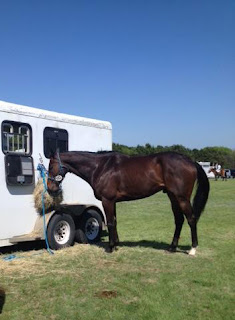 I always use an Aussie tie ring with off the track thoroughbreds to teach them to tie to the trailer.  I attached Silk to the tie ring and gave each horse a large hay net and stood back to watch.  Silk stood quietly and ate his hay.  He was wonderful.

Silk became upset when we took Eliot away so we took him over to where he could see Eliot while I was riding him and both horses liked the arrangement.  I rode two dressage tests with respectable scores in the 60s and bringing home a first and a third place.  It was a wonderful day and both horses could not have been nicer.  It was a great day out for all of us.

Today my farrier came.  Silk had his racing plates removed and regular shoes put on.  Slowly but surely we are leaving his racing career behind.  Hopefully, we are on the road to a show career.
at April 17, 2017